Presentation of our campaign against hate speech 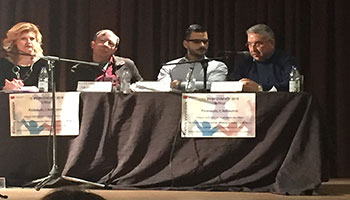 On Thursday 15th February 2018 Mr Nikos Pantelias, Debuty Mayor of Social Policy Derartment of the Municipality of Aghii Anargiri Kamatero made a presentation about “Combating Hate Speech: an innovative campaign that is going on in Municipality of Agioi Anargyroi Kamatero" with great success .

The presentation took place during the event "Racism or Humanity" in the hall festival of the Municipality of Haidari in Perfecure of Attika. The partitipants were politicians, reporters and women of a socialistic party. During the event the documentary, titled "Kisses to the Children" by B. Loule, was shown and it was about hate speech against Hebrews during the Second World War. After the presentations an open discussion followed about the phenomenon of hate speech though history and in nowadays and finally about the measures that the state should take, in order to combat it.

This web platform has been developed with the financial support of the Rights, Equality and Citizenship (REC) Programme of the European Union. The content is the sole responsibility of the Sofia Development Association and the project partners and can in no way be taken to reflect the views of the European Commission